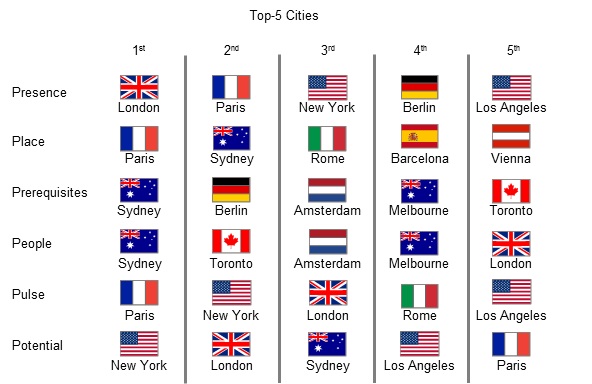 The biannual CBISM survey was conducted among citizens in 10 countries – both developed and developing – that play important and diverse roles in the flow of business, cultural, and tourism activities. In all, 5,166 online interviews were conducted with adults age 18 or over.

Paris a winner – despite attacks

Simon Anholt, Independent Policy Advisor on National Identity and Reputation, comments, “Our survey was conducted before the November attacks in Paris – but, if past experience is anything to go by, such attacks do not change people’s perceptions of the city in any significant or long-lasting way. There may be a temporary change in people’s behavior towards Paris – but the attacks do not affect the reasons why people might admire the city’s beauty, cultural life, opportunities, etc. and this is what CBI measures.”

New York, Los Angeles and Washington, D.C. saw their score increase from the 2013 CBISM Study. NYC and LA rose more than two points versus 2013. Washington, D.C. gained less than one point, but still dropped four places due to being outperformed by other cities.

“Paris, London and NYC, the top three cities globally, are still struggling to bring their world-class reputations into the specific dimensions of Prerequisites and People,” said, Vadim Volos, GfK’s SVP of Public Affairs and Consulting and leader of the CBI study at GfK.

“When it comes to affordability, these cities all rank at the bottom of the list (47th, 46th and 48th respectively), while New York is also marked down for its People dimension. This enables countries that are ranked lower in the overall Index to win spots among the top five for specific dimensions – giving them a foothold in the international arena.”

About the Anholt-GfK City Brands IndexSM 2015

The Anholt-GfK CBISM Index measures the image of 50 cities with respect to Presence, Place, Pre-requisite, People, Pulse and Potential. For the 2015 study, 5166 interviews were conducted in total, consisting of at least 500 interviews in each of Australia, Brazil, China, France, Germany, India, Russia, South Korea, UK and USA. Adults aged 18 or over are interviewed online in each country. Using the most up-to-date online population parameters, the achieved sample in each country has been weighted to reflect key demographic characteristics including age, gender, and education of the online population in that country. Fieldwork was conducted from September 10th to 23rd, 2015.

The 50 cities ranked in the survey are as follows: