City Reputation Rankings: Four Cities We Love For Their Sustainability 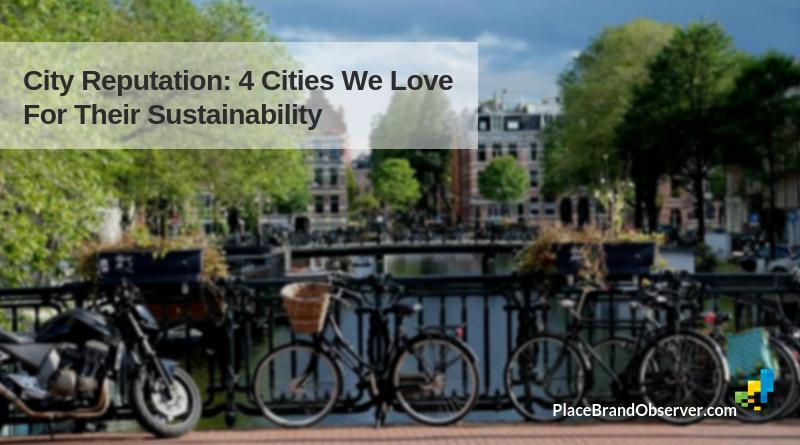 I don’t think I was the only person surprised in early 2015 when the Sustainable Cities Index announced that Frankfurt was the most sustainable city. I mean, what methodology did they use to work that one out? This weird feeling of mismatch, however bizarre, tells us something important. It tells us that some cities have reputations for sustainability and some don’t.

There are a few who have mastered the conceptual fusion of hard metrics and the emotional connection. We are going to take a look at the top four of these green urban beauties to see what they can teach us about winning hearts and minds.

Here are two top-ten lists: One from City Reptrak and the other from the Green City Index. You can argue about which lists to use but what is neat about these two lists is they agree on four cities in their top ten.

The Green Cities Index doesn’t list Frankfurt as number one, but Frankfurt isn’t in the top ten most reputable cities list either, so it doesn’t matter. These four cities are the beginning of our quest to find out about sustainability reputations.

Let’s look at some of those cities in more detail:

Copenhagen, now rated as one of the most livable cities, was not always that way. In 1962 the streets were filled with cars, the city squares were used as car parks, and the conditions for pedestrians were rapidly deteriorating. Then in November 1962 the first street was pedestrianized. The movement took hold and today many streets and squares are car-free space.

The most recent and famous initiative of Copenhagen is the cycle network expansion. Between 2009 and 2014 Copenhagen increased cycle routes from 388km to 454km, many of them improvements on the bicycle ‘superhighway’ but some also high profile inner city paths, such as the iconic cycle snake that connects Vesterbro and Islands Brygge.

Developed as an alternative to a failed congestion toll, the bicycle superhighway is reducing congestion and increasing the percent of trips longer than 5km made by bicycle.

Top sustainability marks for: The goal to be carbon-neutral by 2025. Denmark has succeeded in cutting the average CO2 emissions per kilowatt of energy produced, by 36% since 2005, using wind-power. In 2014 that was around 2.9 tons CO2 emissions per capita. The city itself has also made large reductions in CO2 emissions with the increased use of biomass in the combined heat and power production plants. The city also scores well on equality rankings.

What could it improve: Recycling is low compared to some cities in the world, even though very little (less than 2%) goes to landfill much of the remainder is incinerated. Around 35% of waste was recycled in 2014.

Stockholm has a long history of renewable energy, public transportation and energy efficiency, even before the phrase “sustainable” was coined.

Depression-era Stockholm invested in a job-building program – a comprehensive subway network as the backbone to the future metropolitan public transport system. Then in 1952 the Stockholm Master Plan started a new era of transport-oriented development and planned model districts, one of which (Vällingby) became internationally famous. However, this policy had mixed results and eventually fell from popularity in the 1970s, ushering in a new era of preservation and traffic calming. Today the concept of the walkable-city is important.

The current iconic sustainability initiative of Stockholm, in a return to model city building, is the sustainable regeneration of the Hammarby Sjöstad brownfield site. It was initiated as part of the city’s 2004 bid for the Olympic games, and even though the bid failed, the project continued. The project features compact urban design, integrated transport-system, solar panels on most buildings, and water and waste recycling schemes.

Partly as a result of the Hammarby Sjöstad initiative, the European Commission named Stockholm the European Green Capital Award in 2010, the first city to win it.

Top sustainability marks for: The goal to be fossil fuel-free by 2050. The transportation measures and combined heat and power plants enable very low CO2 emissions. In 2014 that was around 2.8 tons CO2 emissions per capita. The city also ranks well in green buildings.

What could it improve: Despite targeting very low CO2, the city’s electricity consumption per person is still high compared to top green cities. The city has high water consumption and poor water-efficiency. The city is not as equitable as Copenhagen, so would benefit from improving its equity scores.

Vienna is known for culture: music, art and architecture. Yet it also has an amazing legacy of open green space in and around the city, which makes people associate it with the natural environment. Added to this, high social equity, welfare and effective city planning has resulted in Vienna being ranked as the city with the highest quality of living.

Vienna has a great deal of emphasis on environmental preservation of the land and water in and around the city borders. For this reason the amount of water used per person is less in Vienna than in Copenhagen and Stockholm.

The city also does well on recycling, and has a waste to heat plant designed by Hundertwasser that attracts a flock of tourists each year. The city can proudly claim 50% of the city’s area as green space. Vienna’s infrastructure is well developed, with an efficient public transportation network, which leads it also to have strong productivity scores.

The climate and environment reporting by Vienna focuses on mobility, renewable energy, energy efficiency, biodiversity and reducing waste and water. The statistics for 2011 by the Umweltbundesamt indicates 5.16 ton CO2 emissions per person and the environment report is unclear on reduction targets.

What could it improve: Energy consumption and CO2 emissions.

Vancouver is blessed with an amazing climate compared to other Canadian cities, warmer in the winter and cooler in the summer. The surrounding natural wilderness, mountains and beaches, attract thousands of tourists each year. In addition, Vancouver has a compact urban form and has a remarkably high number of cyclists compared to other North American cities.

The reputation for sustainable urban development was built upon a history of social and environmental activism. In the 1970s there was a plan to bring a freeway through the heart of Vancouver. It was the public opposition to this plan that preserved the city’s historical neighborhoods of Gastown, Chinatown and Strathcona. This began the love affair with mix-used urban spaces and walkable neighborhoods.

Today Vancouver has formulated the Greenest City Plan to become the world’s most sustainable city by 2020. The initiatives include improving cycling networks, and reducing greenhouse gas emissions by 33% compared to 2007 levels.

Top sustainability marks for: Air quality legislation and strategies have led to outstanding air quality, which in comparison to the three European cities is far ahead. However, while CO2 emissions are dropping, some 7% since 2008 bringing them to approximately 3.9 tons CO2 emissions per capita, this is still no competition for Stockholm.

What could it improve: Vancouver is on the path to recycle close to 63% of waste, an enviably good statistic. At this rate the city could be in a position to compete for first place on waste management. (55% recycled municipal waste in 2007, estimated based on annual report of 18% improvement, results in some 63% recycled 2014/2015, which may make it competitive for second place in north America on waste recycling).

After laboring through the archives of city histories to bring you the background stories of these four cities several glowing important truths have become clear.

If you take a deep look into the histories of each city you will become lost in the detail, but if you compare them this becomes apparent:

We have discovered that some elements of sustainability are more fashionable than others. Yet, the cities that are benefiting from a good sustainability reputation are riding on a mixture of both old and new. The ‘old’ are the decisions made by our forefathers that have improved or preserved the ‘environment’. This typically means public transportation, cycling and walking in our cities but also means the natural wilderness. The ‘new’ means those iconic projects that link back to sustainability, transportation and nature themes.

The wonderful thing about sustainability reputations is they can’t really be faked. An iconic project will attract attention but won’t capture the hearts and minds of the people like a long story will. The next volume in the story of urban sustainability will most likely focus on the battle to reduce CO2 emissions, resulting in many colorful manifestations.

What with the Paris agreement burning a new urgency into public policy and climate change hot on our heels there will be a renewed vigor from cities to reduce greenhouse gas emissions and this will lead to new stories, new identities and new reputations. New green urban beauties, with few cars, and… let’s see.

With a degree in environmental engineering (Melbourne) and expert in sustainability analysis, Emily has a keen interest in the sustainability of cities, including their buildings, renewable energy and infrastructure.

Emily, now living in Berlin, is the founder and editor of plannedcities.com dedicated to unlocking the benefits and profitability of urban sustainability.

Connect with Emily on LinkedIn

Liked this post with insights on city reputation rankings and urban sustainability champions? Share and spread the word!