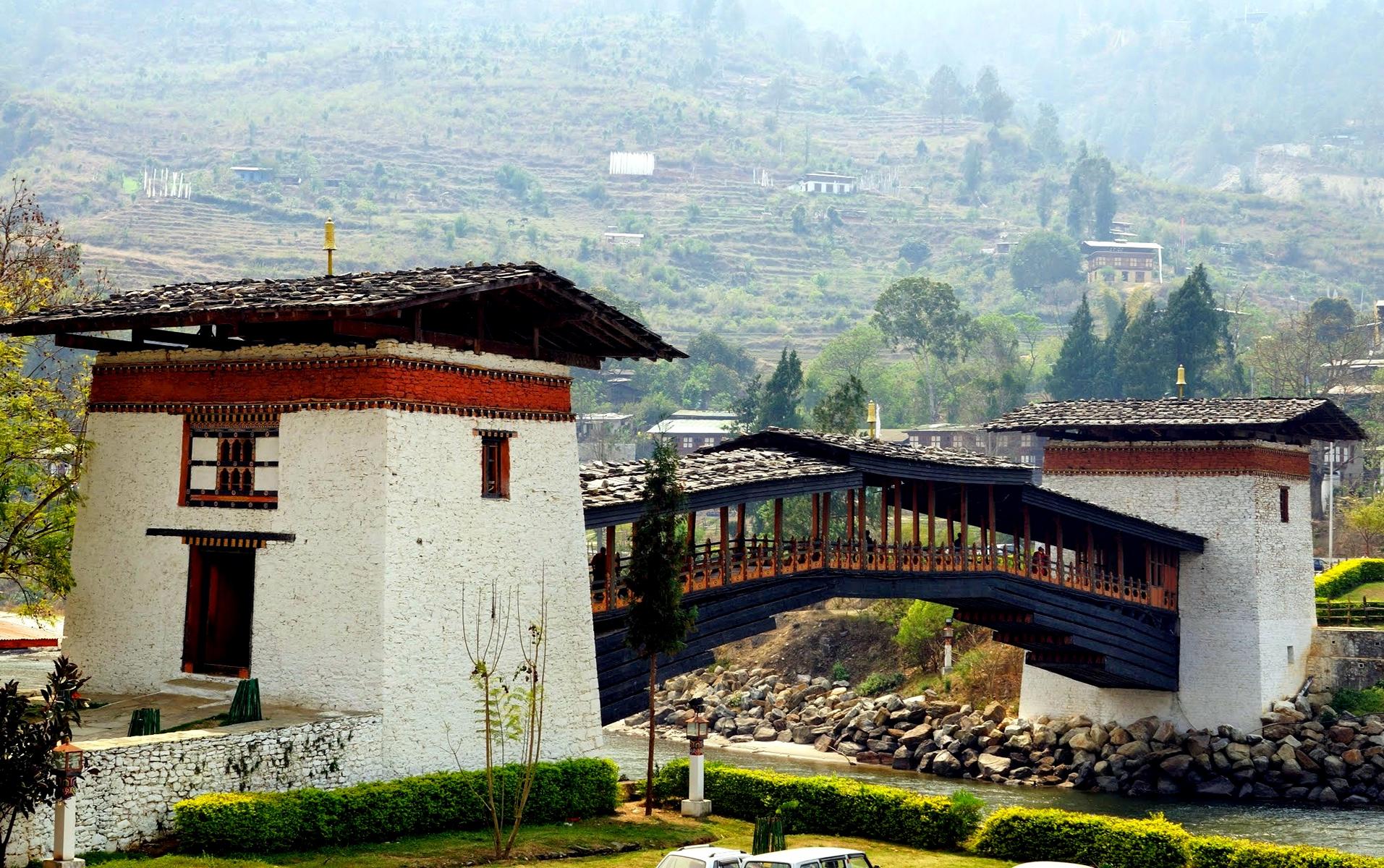 Nestled in the Himalayas and between territories of more than two billion people of India and China lies a nation described as having mystique, magic, mystery — the last Shangri-La. Verdant valleys, breathtaking mountain views, rich forests, pristine and pure waters, streams, cliffs that challenge, and monasteries that inspire peace dot its landscape. Here, archery is a passion and bicycling has become more than a pastime.  Collectively, it has led to the start of the Tour of the Dragon bicycle race, where you live the mountain adventure in an ultra-marathon race covering over 268 kilometers on the most rugged and treacherous of tracks.

Whilst you and I struggle to keep pace with a globally connected world, this is a country where the internet and television were introduced in the very late 1990s. This is a country where the King ushered in parliamentary democracy peacefully. It is the only country that practices Mahayana Buddhism as the state religion and is also carbon neutral. Furthermore, 70% of the country is covered in forests. Happiness is a Place in Bhutan!

Nature simply overwhelms you here. Invited by the Royal Government, I had the opportunity to discover Bhutan during my participation in the First Better Business Summit held in Thimphu in 2014. The deliberations at the Summit, interactions with the policy makers and conversation with the very articulate Prime Minister Tshering Tobgay served as part of a core group meeting to reinforce the country’s resolve to stay on course.

This global business summit was the first of its kind held in Bhutan. The discussions were remarkably frank and put Brand Bhutan, its guiding principle, Gross National Happiness (GNH), to test.

Gross National Happiness (GNH) is both the defining fulcrum and metric for Druk Yul aka Land of the Thunder Dragon.  The GNH is a term, which was coined by His Majesty the Fourth King of Bhutan, Jigme Singye Wangchuck, in the 1970s.

The concept of Gross National Happiness implies that sustainable development should take a holistic approach towards notions of progress and give equal importance to non-economic aspects of wellbeing (source: grossnationalhappiness.com).

Such a novel principle of this order — in a world where political and fiscal economies largely rule — has caught the imagination of thinkers and policy makers alike. This is a powerful contribution by an otherwise unassuming Brand Bhutan.

Recently, I asked Director of Globality, Inc. and former Advisor to the CEO of Druk Holdings and Investments (DHI), Randall Krantz, about the sustainability of the GNH concept. Krantz says,

“GNH is applied in Bhutan across several layers. First and foremost, it is a development philosophy, referred to by His Majesty as ‘development with values.’ Second, it is a fairly robust metric and is actually measured on an annual basis using an Index with 124 indicators and sub-indicators spread across 9 domains. Third, the concept of GNH is also used as a filter for new regulations and legislation by way of a policy screening tool developed by the GNH Commission. Any new policy will be evaluated based on its potential impacts across all 9 domains of GNH. Finally, GNH is incorporated into the daily lives of Bhutanese through a wider effort to promote a shift in consciousness by way of meditation in schools and organizations like the GNH Center, which offers transformative learning programs deeply embedded in GNH principles.”

The sustained efforts being made by Bhutan to actually internalize the GNH principles are indeed commendable. Whilst the country provides free access to health and education, Bhutan must contend with its own set of challenges relating to development, infrastructure, unemployment, including employable talent — all of this in addition to the aspirations of a growing middle class.

Engagement with the outside world still appears to be quite limited, made all the more evident by its tourism policy as it has remained focused on high value and low volume since 1974 and was modified to high value and low impact in 2008 – 2009. As the number of hotels and guides grow, the sector is performing below potential. So the question remains, how does Bhutan seek to progress?

I found part of the answer listening to Prime Minister Tobgay at a regional business summit in India in 2015 when he put Brand Bhutan center stage highlighting how the GNH philosophy aimed to carefully balance material growth with inclusiveness, sustainability, and good governance.

Given its relevance in the scheme of things, it is not so difficult to understand why in 2013 there were reported fewer than 60 foreign investments in Bhutan over nearly a decade. The reasons probably can be inferred from the concluding lines of Prime Minister Tshering’s speech at the summit,

“If you like what you see, if you like how you feel, if you can connect with us, then, and only then, I invite you to consider investing in my country. Bhutan is open for business. But only for businesses that are clean, green, and sustainable. For that reason, we welcome investments in renewable energy and hydropower, organic farming and tourism, and education and information technology.”

Abhaya K Agarwal, Partner, EY LLP (Ernst & Young), India, who has been involved in projects in Bhutan, avers that “large business projects are likely to remain a challenge due to viability concerns (largely relating to volumes). Tourism and organic agriculture would be the biggest draw for the country.”

Bhutan fascinates while it beckons a need for answers at various levels.  At some level, Brand Bhutan appears reluctant, skeptical to engage with the world that it probably anticipates may overwhelm its traditions, culture, and heritage in the name of progress.

Somewhere those fears appear natural and real, and rightly so. Urbanization certainly does give way to a modernized culture, which overtly makes it different from what it may have been before. As already visible in Asia, countries are driven to revive and market their culture and dying heritage in ingenious ways or preserve it by way of regulations.

To this extent, one can appreciate Bhutan’s very measured and guarded approach to projects, plans and probably the influence of the foreign on its people and culture. It tends to reflect the predicament of a shy and introverted player, hesitant to engage with the global economy.

Given a chance, Bhutan would probably prefer not to change but pressed by circumstance, including the developmental needs of its people, it appears constrained on how to manage change. This may probably explain the not-so-defined aggression for investment. And while it may appear an aberration in this world driven by competition in trade, investment and even tourism – and nothing wrong with that – this probably is leading Bhutan to script a different socioeconomic model based on development with values.

In other words, it appears Bhutan prefers to manage change at its own pace and drastic tectonic shifts will not likely fit into its scheme of plans.

Country branding as opportunity for Bhutan

A part of the planning for the future though may be branding, a worthy investment, given especially that Bhutan already has a brand aspiration and structure in place. At an obvious level, there couldn’t have been a more appropriate tagline than Happiness is a Place for the country’s tourism campaign.

At another level, Bhutan appears wanting and in need of a nation brand campaign that can present to the world its national identity and priorities in a cohesive manner.

The Government is known to prioritize its investments according to an Economic Development Plan (EDP) which, among other things, articulates the aspiration of Brand Bhutan:

“Natural and pristine environment; vibrant and living culture; nation of GNH; peace and security; reliable and competitively priced energy; will form some of the country’s Unique Selling Proposition (USP) based on which Brand Bhutan will be developed.”

Additionally, emphasis on an organic culture by the Ministry of Agriculture, Invest in Bhutan by the Ministry of Economic Affairs appears to be a priority. And for sure, there must be numerous engagements with the external world around values held dear. To say the least, the brand and the brand ingredients are ready.

Now is the time to develop an umbrella nation brand that could present a cohesive brand identity of Bhutan to the world, which integrates and captures its GNH inspiration, reverence for tradition, monarchy, Buddhism, crafts besides highlighting its developmental priorities.

This could both make the country’s approach more robust and manage the expected outcome in a calibrated manner by way of ensuring greater clarity in processes and coordination across all stakeholders. Clearly, nation branding as a strategy for countries like India has been critical to communicate the transition underway and how communities, businesses and nations can be part of the change.

Every country in this world has brand salience around some touch points – culture, people, tradition, industry, tourism – and nation branding assists in both identifying and using these levers to its advantage for the country’s positioning and making its priorities known to the world.

Until such thinking weaves its way into Bhutan, we should indeed be content to know that Happiness is a Place, at least for now!