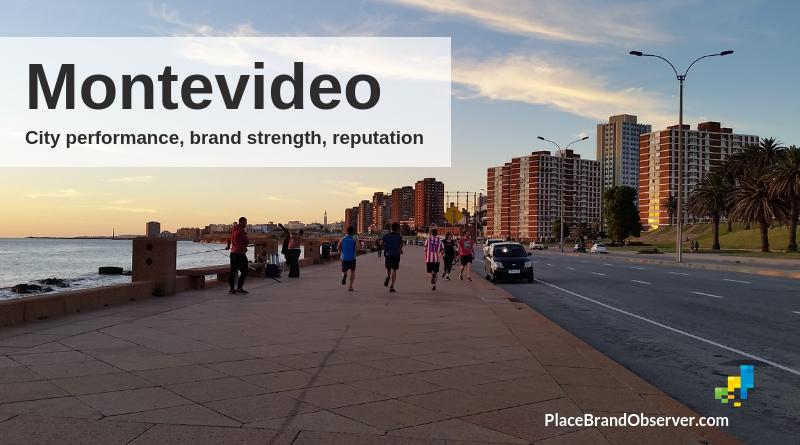 Montevideo: how attractive is Uruguay’s capital city for investors, talent, businesses, and visitors? Here an overview of the latest rankings and studies on Montevideo’s economic performance, its sustainability, brand strength, and reputation.

The port of Montevideo is among the most important in South America. Its major competitor is Buenos Aires, being the other great port at the Río de la Plata. Produce leaving the port are characteristic for Uruguay’s economy, such as dairy, meat, and wool.

Another major source of income for the city is tourism, benefiting from a rich architectural and cultural heritage and the “Ramblas”, coastal pathway.

The city’s architecture is partially reminiscent of colonial times and several heritage sites can be found here. Besides, the city is home to museums, restaurants, nightclubs, and everything which capital cities usually have to offer. Although a bit run down in parts, the neighbourhood Ciudad Vieja is of great significance for tourists.

The skyline of the city is dominated by the ANTEL Telecommunications Tower of 158 meters – the highest free-standing building in the country – and the Palacio Salva, completed in 1928.

In terms of the environment, the city is not performing very well. The Latin American Green City Index puts the city on a below-average position from all 17 ranked Latin American cities. Montevideo performs especially bad in the category of ‘land use & buildings.’ The index relates this to relatively weak policies and requirements for eco-buildings and land use.

The only category the city performs above average is in ‘environmental governance.’ Montevideo performs well for monitoring its environmental performance and publishing the results, and the city provides residents with a central point of contact for information about environmental projects.

According to the aforementioned index, the city performs below average in the category of ‘air quality.’ However, 2020’s Pollution Index ranks the city 12th out of 15 Latin American cities. The higher the rank, the better. Globally, the city ranks 188th out of all 314 cities included in the study.

Montevideo’s quality of living is quite high, the highest in Latin America, and 78th worldwide. Mercer’s Quality of Living Ranking has attributed a similar position to the city in the past couple of years. This ranking provides data on the quality of living for employees sent to work abroad. The positions are based on several indicators over multiple categories, such as housing and natural environment.

The Sub-National Human Development Index ranks Montevideo the best city in the country and it also ranks the city highly globally, across the three dimensions of education, health, and standard of living.

Montevideo: how attractive for digital nomads?

As for being attractive for digital nomads, Montevideo is performing mediocre (at the moment). The Nomad List provides a list of where to best live and work remotely, which is re-generated every ten minutes. Since some data are very flexible – such as temperature – cities can rise and fall easily in the ranking. In the case of Montevideo, the speed of the Internet is considered mediocre, although with many free Wi-Fi spots. The city does not perform too well in terms of hospitals, nightlife, English speaking possibilities, and start-up scene.

On the other hand, Montevideo scores very well as an LGBT friendly place, and for freedom of speech.

A hub for innovation?

Despite Montevideo’s solid reputation as a highly ranked city, it does not do so well in terms of innovation. Many Latin American cities perform better in this category than Uruguay’s capital city, being ranked 21st out of 39 Latin American cities in the Global Innovation Cities™ Index 2019. This is based on the city’s performance across 31 segments and taking into account 162 indicators.

Enjoyed our summary of global rankings and indices on Montevideo’s economic performance, its sustainability, attractiveness for digital nomads, brand strength and reputation? Thanks for sharing!