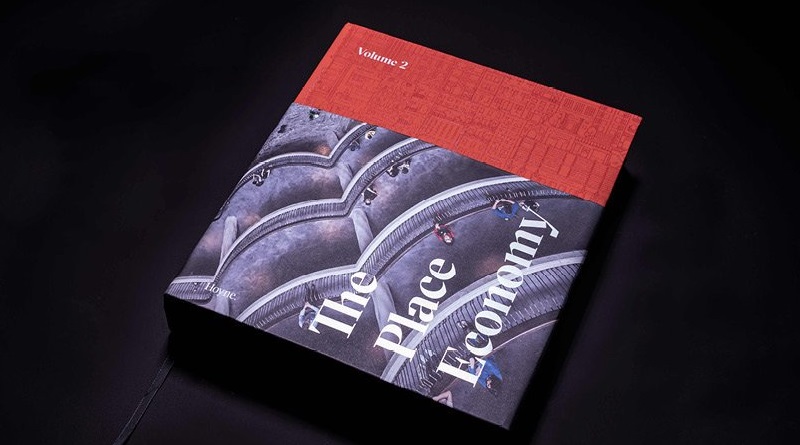 At last, the much anticipated second volume of The Place Economy is available. Like the first volume, it offers an inspiring collection of placemaking and community development stories and cases from around the world – including a short essay on country branding by myself. Andrew Hoyne in Australia is the mastermind behind this series. I asked him how the placemaking and place branding landscape has changed since publishing the first volume of The Place Economy.

Andrew, with The Place Economy Volume 2 you again managed to present an invaluable collection of placemaking examples, insights and reflections from leading place developers, managers and communicators – is the book very different from the first volume?

When we launched The Place Economy in late 2016, we didn’t really know what the reaction would be. When people from London, New York, Hong Kong, Barcelona and Berlin began getting in touch because they had seen it, heard of it, or purchased a copy, I was blown away.

Volume 2 is even bigger than the first book and we’ve covered more topics, interviewed more thought leaders, compiled more case studies and interrogated more of what it takes to make a place meaningful, around the globe.

We have also altered our approach a little. In the new book, we’ve gone from macro to micro, looking at placemaking in the context of entire countries, then drilling down to regions, cities, small precincts, neighbourhood blocks and everything in between.

We learned a few things from the first book which I think reflect the things we’re learning in the development industry generally. One is that compelling and beautiful architecture can often hog the limelight, overshadowing what’s happening on the ground.

I am an architecture nerd but, at the end of the day, as nice as it is to stand back and admire a majestic building, the real measure of its success – the thing that really matters to all of us – is how people interact and engage with it. This generally happens at the street level or ground plane.

How a structure complements and evolves with the surrounding community and landscape is also crucial.

With this in mind, the philosophy behind our second volume evolved. In it we look more overtly at how spaces are used, examining who’s already there and who’d like to be there, what physical or landscape elements are already in place and what should be added to meet the needs of the community – by which I mean residents and visitors, the commercial and government sectors and the private individual equally.

This is the second volume of a planned three-book series. What is driving you and the Hoyne team to invest so much effort into The Place Economy, a not-for-profit endeavor?

When academics, industry leaders, government officials and commercially successful property developers all recognise and agree that better places breed better lives and better futures, we glimpse the promise of a different world. We’ve created The Place Economy to give people practical insights into how this can and is being achieved.

It’s also a reminder of the benefits we can enjoy commercially, but also as countries and communities, if we pay attention and do the creative and hard work now! The vast amount of knowledge, expertise and examples our industry can now tap into makes poor outcomes indefensible.

The Place Economy is Hoyne’s way of celebrating all the companies and individuals who continue to push the paradigm, creating places where everyone can prosper and encouraging others to follow suit.

And yes, 100 per cent of our books sales go to Habitat for Humanity Australia. The immediate popularity of Volume 2 means we have raised more than $90,000 from the two books so far but it’s early days with this new book … I know we can do better.

Which changes have you witnessed since publishing the first volume of The Place Economy, in how placemaking and place branding are approached in Australia, and the world?

Undoubtedly more people acknowledge the need for placemaking now; they have a clearer notion of what is required. But the new conversation – and the challenge really – involves making them understand the social and economic benefits it delivers. Because of this, Volume 2 of The Place Economy pays a lot of attention to case studies where positive economic upswing is taking place. We realise how crucial it is to provide the development industry in particular with necessary proof points so they can move forward confidently with their own projects.

And a key thing I’ve learned is that developers want to be innovators, but not pioneers. This means that ideally someone has already paved the way with an approach, with great metrics and increased profit to prove the point. So, to mitigate risk, the new paradigm is not to do what you’ve always done, since that approach in a modern and competitive society is the riskiest of all. To mitigate risk now, great developers know you need to create a compelling destination, which gets people visiting, spending and talking.

The other thing is that placemaking, much like The Place Economy itself, only works through collaboration.  Basically, whether you’re talking about planning and development, architecture or landscaping, place branding or destination marketing, Place Visioning™ or placemaking, each discipline is required if we’re going to meet the needs of different people across various geographic and cultural places.

Finally, the notion of brand and how significant that has become in relation to placemaking is quite striking.

Perhaps once considered window-dressing, place branding is now an influential element in the ongoing physical, emotional and economic wellbeing of a place and its people. In the right hands, it is recognised now as a nuanced and powerful tool.

Among the many cases and examples which you present in the book, which ones do you find the most remarkable, in terms of living up to the aspiration of being or becoming imaginative communities?

They are all notable for their own reasons but a few do stand out, especially from a Place Brand Observer perspective.

We have a whole chapter devoted to Brisbane and its ambition to become a New World City. I mean this is vision at its highest level so we decided to look at those precincts and places that have defined the Queensland capital to date and explore the people and plans destined to shape its future. So much is happening in Brisbane, at macro and micro levels, that is worth investigating.

The other place is Detroit. Anyone even vaguely interested in redevelopment, placemaking or place branding would be familiar with its resurgence – as a city, a community and as a brand. To prepare the new book I visited the legendary ‘Motor City’ to see it first hand and I was not disappointed. It was amazing because I got to spend time at Rock Ventures whose founder, Dan Gilbert, is the man often credited with kick-starting Detroit’s revitalisation, and at the headquarters of Shinola, the high-end watches with a brand DNA entirely rooted in ‘Built in Detroit’. It’s fascinating to see how one individual’s imagination can positively impact an entire city.

The other remarkable example we cover in the book is Berlin. A 2008 opinion poll conducted by market researchers TNS Infratest found that Berlin, whilst being Germany’s largest city, was not top-of-mind for foreign respondents when it came to nominating preferred places to live and work. By 2017 Monocle’s Quality of Life Survey was listing Berlin as one of the top 10 cities in the world.  When you go there you discover a really vibrant, distinctive and sophisticated place. A lot is changing in terms of the physical, social and cultural landscapes and it’s pretty exciting to be around.

Looking forward, which trends do you witness which might affect the capacity and ability of communities to be more imaginative in how they foster community spirit and represent themselves to the world?

Information sharing of all kinds is the trend we need to embrace and encourage. From supporting our elderly to protecting our artists, key themes are uniting and extending the purpose and possibilities of placemaking around the world and we should be learning from each other.

At the highest echelons, the United Nations’ New Urban Agenda promotes sustainable development. At the grassroots, local governments are re-thinking the zoning of cities in an effort to change the fortunes of individuals and industries.

Innovation and creativity are the consistent links. From a group of Sydneysiders initiating their own bold version of retirement-aged living to organisations using big data to better design transport systems, the discussion and discovery is inspiring and instructive to me. By tapping into this well of wisdom, we can adapt proven ideas and strategies. By harnessing technology and information, we can gain a more accurate understanding of human habits and movements than ever before, and act accordingly. By speaking to our communities, and inviting them to participate, we can be responsible for introducing meaningful advancements relevant the world over.

The best thing happening is that placemaking has escaped the whiteboards and discussion papers of well-meaning academics and specialists to become de rigueur for many of the most successful residential and commercial spaces in the world.

No place is too big or too small that it won’t benefit from things such as well thought out and inclusive visioning along with investment in better materials, technologies and programming.

What makes a place work best for people, whether that means the developers or owners, commercial tenants, residents, community groups, children, foodies, workers and others?

The common themes are pretty simple to identify. Again and again, they come back to a focus on individuality, analysis of what is there and what is missing, the ability to meet genuine needs, the fostering of human contact and the power to adapt and evolve. From making sure your bike-loving tenants have somewhere to store their two-wheeled steeds to putting jobs back where they’re actually required, to facilitating ways for people who share apartment buildings to also share lives, the link between commercial and cultural success is repeatedly played out.

Take a peek inside: The Place Economy, Volume 2. More about Hoyne in Australia here. Looking for a speaker on placemaking challenges, trends, success factors? Get to know Andrew’s style, vision and approach in this interview or his speaker profile.