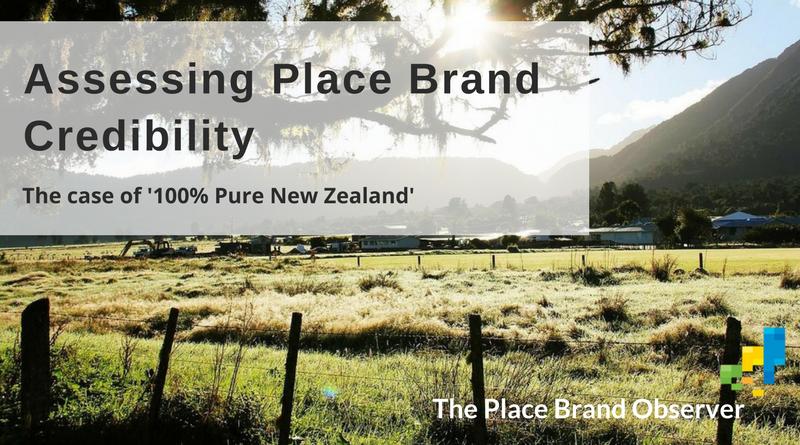 This last part of my series on ‘clean, green’ New Zealand is a case study on assessing media perceptions of place brand credibility. The case study is special for two reasons: First, it is based on my doctoral research at the Department of Management Communication at the University of Waikato in New Zealand. Second, without it The Place Brand Observer would most likely not exist. It was the fascinating case of Brand New Zealand which first got me interested in the branding and reputation of places.

In times where the perceived credibility and authenticity of brands is more important than ever, cities, destinations and countries need to be extra careful to make sure their brand promises and promotional campaigns live up to reality.

This case study on the perceived credibility of New Zealand’s brand positioning as a clean, green food exporter and 100% Pure tourist destination demonstrates how vulnerable even the most successful place branding strategy can be, if its credibility is challenged.

In particular, it examined Australian, UK and US press coverage of New Zealand’s environmental performance linked to carbon emissions, and its branding, to determine the perceived credibility and potential vulnerability of the country’s clean, green and 100% Pure global environmental positioning.

The study follows the argumentation that, as calls for environmental responsibility are growing louder, the global competitiveness of nations and places increasingly depends on their ability to convince audiences both domestic and overseas of their environmental credentials and integrity.

As a main carrier of country reputation and channel through which place image travels, the mass media play a crucial role with regard to the perceived legitimacy and credibility of a place’s brand positioning.

Media representations are even more relevant in the case of New Zealand, due to its remote location, and because its global reputation as clean and green is of enormous economic value, especially for its tourism and food exporting sectors.

The purpose of the study was to find out to what extent fears over a loss of NZ’s clean, green reputation are warranted.

To ascertain the perceived credibility and potential vulnerability of New Zealand’s “green” brand positioning, I analyzed coverage of New Zealand’s environmental performance (using carbon emissions as proxy) in leading Australian, UK and US newspapers between 2008 and 2012. At the time of the study, those countries represented New Zealand’s strongest allies and key trade partners.

I focused on the amount and nature (tone) of press coverage, and paid particular attention to the possible reasons for changes in coverage over time and differences across countries.

For details on methodology, see:

With regard to New Zealand’s perceived environmental credibility, findings from analysis of literature and secondary data, such as newspaper articles in New Zealand, indicate that within the country there is growing unrest and uncertainty about the legitimacy of the clean, green and 100% Pure brand positioning. Changes in political discourse from sustainability to economic growth built on measures not easily compatible with the branding, position the country at a critical juncture regarding the legitimacy of its global environmental positioning.

In terms of overseas news coverage, the study shows that, contrary to a generally favorable perception at the beginning of the study period in 2008, ending the year 2012 NZ was no longer in the spotlight as an environmental leader with regard to carbon emissions, but instead had become a minor player the global community largely ignored in the climate change arena.

Judging from Australian media coverage, NZ’s environmental reputation was still largely intact there, while in the UK and the US isolated unfavorable articles could be first signals of a shift in perceptions. In the absence of both symbolic actions and the coverage needed to maintain the image and reputation, NZ’s global environmental positioning has become more vulnerable.

Having said that, because unfavorable coverage of clean, green and 100% Pure New Zealand was found to be comparatively scarce, the study concludes that there is still an opportunity to maintain NZ’s environmental reputation by backing it up with business and government leadership in the environmental arena.

The doctoral thesis is available via:

Two years have passed since I submitted my thesis. My impression is that both the credibility and legitimacy of place branding initiatives have become critical issues for place leaders and brand managers to watch out for, especially in the context of sustainability performance. The recently founded Good Country Index by Simon Anholt and with Robert Govers as research director is one indicator.

Here at The Place Brand Observer we will keep a close eye on sustainability performance and how it affects the reputation and competitiveness of places.

Enjoyed reading about media representations of national environmental performance and place brand credibility in the case of New Zealand? Spread the word!