Cities of Influence: Talent Attraction Winners and Priorities in Europe 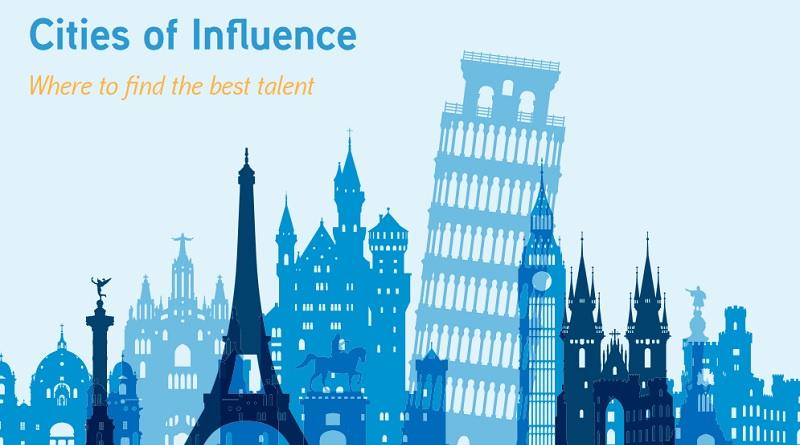 A recent report on talent attraction winners and priorities in Europe is the focus of this contribution by Roger Hobkinson, Director of Destination & Development Consulting at Colliers International. Learn which cities are leading in the race for talent, which are the priorities and what city brand managers can do to not be left behind.

The race for talent accelerates

I expect many reports from around the world catch the eagle eyes of The Place Brand Observer. This was certainly the case with the report written by Colliers International’s European Research team, titled European Cities of Influence: where to find the best talent. As a global top four real estate advisor, the purpose of the report was to help our corporate clients understand which cities they might want to focus on, depending on their specific corporate objectives and requirements.

Damien Harrington, who leads our European Research group and authored the report, identified a number of variables to determine city influence over talent attraction. He placed them into four categories, with various weighting:

Twenty of Europe’s leading cities were ranked on the above categories. London and Paris lead, no surprise there, but notable successes included Manchester, Dublin and Stockholm. Whilst Madrid and Barcelona fail to build on promising foundations, Berlin, Milan and Brussels find themselves in the bottom half of the table. The report can be accessed here.

Damien outlines that the work has helped to sharpen the locational thinking of businesses:

“Some occupiers will be more focused or interested in one component over another and thus the overall weighting and scores could change according to these preferences. For example, occupiers driven by cost may see the southern European and CEE markets as more attractive than their northern and western European counterparts. Alternatively, occupiers focused on a digitally sophisticated workforce will be more tempted by Stockholm and Prague than Barcelona or Brussels.”

“London may be one of the most expensive cities from a real estate standpoint, but when taking all factors into consideration, and the ability of the city to re-invent and evolve, it is superior to all other major European cities in this study. Recent announcements at the end of 2016 by global tech giants including Apple, Google, Facebook and IBM re-affirmed their commitment to the future of the London and UK economies. Trump’s latest immigration policy could be even more reason for talent to move to London. The ability to hold on to its workforce and continue developing its talent base will be critical to ensure the UK’s capital remains a primary attractor of corporate activity.”

I had a good chat with Damien, who confirmed several months on from the report’s release that it stimulated considerable debate amongst Colliers’ existing and target clients. Many confirmed that attracting and retaining talent is increasingly important; especially at a time when European economies are recovering and growing, unemployment is falling and labour markets are becoming tighter.

Interestingly, different business sectors are placing different emphasis on the importance of talent. Tech companies are really at the vanguard of looking for locations with the best experience for target employees. Finance companies, on the other hand, are more concerned with having the right address and business regulations.

An overall trend is for Millennials/Generation Y to gravitate towards certain businesses. In the war for talent this is forcing “older” businesses to up their game.

My question to Damian was: yes we know about costs, critical mass of business size, labour market etc., but surely an important missing ingredient in the analysis is the “sizzle” that a place offers – the lifestyle opportunities that will attract talent and thus businesses?

As Millennials and the emerging Generation Z (born “on the Internet”) start to dominate the working population — lifestyle opportunities will be increasingly important, We both agreed that those should be captured in a future version of the Colliers “Cities of Influence” programme.

This demographic change means that cities, workplace projects and businesses will have to work harder to attract and retain talent, especially with many of them looking to move between various jobs and cities where they feel their skills, ambitions and lifestyle goals are best served.

Linked to the previous point, urban buzz is another priority for talent attraction, judging by the research presented in the report. The demand from business is increasingly for office products located in dynamic, attractive city centres with an excellent urban environment, plus high quality accessibility. This also reflects the preferences of Millennials for attractive urban spaces to work, live and socialise in.

Cities that offer appealing city centre office spaces will be increasingly favoured by skilled talent. Out of town business parks will need to bring out their advantages and how they can provide an attractive solution to both businesses and talent.

It is about people, stupid

Douglas Clark, MD of Location Connections, a leading international advisor on location decision-making, gets annoyed when he sees cities or real estate projects just listing their assets. He says “So what, you have a university, modern telecoms, grants, skilled labour etc, they are things any place can offer.”

What Douglas really likes is when a city tells the stories that businesses and people have in a place. “Cities or places are still not talking about their people enough. This is for the vast majority of businesses now their number 1 requirement, so places are underselling the power of their people.”

We’ve worked in numerous cities and projects where we have had to be clear on a market proposition. In St. Petersburg, Florida (USA), the city is attempting a real turnaround by positioning itself as an innovative lifestyle city, moving away from its old reputation as a place to retire in.

In St. Pete they are now developing an exciting proposition with real estate and city districts, such as the emerging Pier District, to help grow its appeal to all ages, but especially to attract younger age groups and families, which is increasingly happening.

In Cork, Ireland, one of the propositions from our recent brand strategy work to help elevate Cork internationally that stuck was “Big on Life.” It expresses the fact that, for a second tier European city, Cork offers a considerable variety of lifestyle opportunities.

A second powerful value proposition for Cork was that the city had a surprising depth and critical mass in the technology sector. This message appeals to talent from not just Europe but around the world. With the city home to tech companies like Apple, EMC and Irish success stories such as Voxpro, this gives international talent the confidence to move to Cork for a job with Apple, but with the knowledge that if it doesn’t work out, there are lots of other job opportunities in the city.

Don’t be left behind in the race for talent

The post-recession world is very different to the past. Across Europe, competition and collaboration between city regions is intensifying for jobs, visitors and talented people.

The single European currency, tax harmonisation, likely increased EU “control”, plus – of course – Brexit, will mean cities across Europe will have to increasingly develop strong brand and marketing strategies as part of their economic development story.

Cities like Manchester, Marseille, Gothenburg, Rotterdam and Barcelona are moving fast. These cities are investment-ready. They are seen as having their act together and realise that they are in competition for investors, developers, occupiers, tourists and talented people.

I’ve attended the worlds’ leading real estate and city marketing conference, MIPIM, held every March in Cannes. Each year an increasing number of European (and global) city regions attend. With over 20,000 investors, developers, architects, property advisors, engineers and corporate businesses in attendance, it is not surprising some 400 European and global cities attend. All promote themselves, have conversations and do deals to help bring forward development projects that house the businesses and jobs that generate jobs and wealth for their people.

Cities that don’t have such a “go to team” or don’t deliver their message internationally, or don’t play the rankings game effectively to understand what, how and when to communicate with their target markets and segments, will increasingly run the risk of being left behind in the war for talent and business.

Connect with Roger Hobkinson on LinkedIn or learn more about the work of Colliers here.

Enjoyed this post on European cities and talent attraction: the winners and priorities? Share and spread the word!