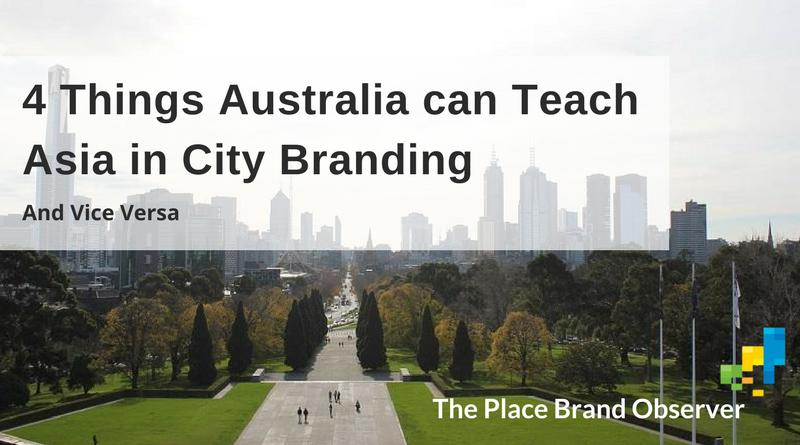 Australian cities tend do very well globally in many city rankings and city strategies. Leading Asian cities are challenging and overtaking many Western cities in some aspects, yet lagging in others.

I hope you enjoy, and can extract a few lessons for your city branding that might be different from the press releases and conferences you attend. Many of the cities have mature public relations, social media and strategy departments. So I will share with you 4 things I think Asia can learn from Australia, and four things Australia can learn from Asia.

One of the most common refrains I hear in my travels for 2thinknow, are that Australians are among the most friendly people anywhere. I think this may be changing now given tourism fatigue in cities like Melbourne, historically regarded (anecdotally on such a subjective measure) as more friendly than Sydney.

Personally, I have found cities like Tokyo and Seoul and Singapore or Kuala Lumpur to be very friendly, but I know others view Australian cities as the most friendly in the Southern Hemisphere.

Every city should try to encourage friendliness in their tour operators, hotels, major landmarks and other locations.

Sports and outdoor lifestyles are also a key plank of the community in Australian cities, and further enforce the image of friendliness and outgoingness.

Melbourne, Geelong, Bendigo and Ballarat have excellent printed materials and websites in English, with visitor centres and resources in other languages.

The clarity and level of promotion of Victoria (the state of all these cities), has been excellent since the Kennett state government (and partly in the Cain Era), and the marketing focuses on small things that interest visitors.

Melbourne sells Haighs chocolates, for example, which produce the highest quality chocolate consistently. This helps create a positive view of Melbourne, rather than promoting a series of indifferent chocolate stores. Many cities choose to promote competing indifferent stores, rather than the best.

Victorian marketing materials published are consistent and clear, and easily understood. This message is even then replicated in Trip Advisor, and similar sites. The government employs a large number of competing private firms for promotion, as well as internal staff.

In the 1980s, Sydney led an Australian tourist boom from Japan through similar clear messages, but post Olympics the environment calcified, reducing the success.

Melbourne (and Sydney as well) have become paranoid watchers of city rankings, and preserving the Economist #1 liveability ranking is the single biggest branding objective of the Melbourne City Government.

I would argue that Melbourne is not actually the #1 most liveable city in the world in a plain English definition, due to overcrowding, public transport problems, and the reduced quality of educational degrees through flooding of the educational market with below average student candidates. There has also been a strong reduction in restaurant quality and rise in living costs.

Sydney and Melbourne are now competitive again, but for some, Sydney has the edge due to its natural environmental assets, global business links and some renewed political capital.

Clear blue skies, get back to Nature

People who come to Sydney enjoy the beautiful beaches, lovely coast (Bondi to Coogee walk anyone?), fish and chips at Bronte, the leafy North Shore and a wide variety of outdoor pursuits.

Each is a matter of taste, and similar stories could be said about Adelaide’s greenery, Brisbane’s river, Perth’s climate and Hobart’s green credentials. Wineries are abundant, and artisan food or coffee of a good quality can be found.

When you contrast that with the air you can eat with a knife and fork in some Chinese cities, then it’s no wonder mainland China is buying up so much of the Melbourne city area.

4 Things Australia can Enhance from Asia

Asia has service, especially cities like Tokyo, Seoul and Singapore. While Australian cities have improved, it’s often not of the same promptness and courtesy I have noticed in my travels.

Waiters in Singapore wait and hotel staff in Tokyo are super helpful and polite, and the five star hotels of Kuala Lumpur are true five star.

Poor service standards can detract from a city brand in the long term.

Australia has under-invested in metro/subway and rail. Transport is overcrowded, poor and fast rail is non-existent. Once Asian capitals trailed Sydney and Melbourne, now Sydney and Melbourne trail Singapore, Seoul, Tokyo, Shanghai, Beijing, and many other cities in the same countries.

Having seen with my own eyes so much transport infrastructure, the conclusion I have come to is that the U.S. and Australia have let slip on investment, and it costs their economies dearly. Of course, I have been warning this for 8 years!

I saw a widely published spreadsheet justifying a case against fast rail, but by changing a few assumptions I can produce an economic case for fast rail. So many bad decisions are based on flawed assumptions done by consultants, and infrastructure investment in Australian capitals is way too low.

Rail is an opportunity for the broader economy. Asian cities ‘get’ this.

Asia and the Mid-East have lower effective input costs in business in almost every area, and the fact that Australia pays so much for electricity is a political boondoggle, and economic heresy.

High input costs mean Australian businesses have to make huge revenues to survive, with Melbourne being more expensive than London in some cases. High input costs relative to historical norms can reduce the desire for experimentation and trying new ideas.

This explains why every 10 minutes (that’s a joke not a stat) there is a new burger bar in an Australian city, and yet many new food ideas are ignored. A burger bar seems lower risk when you have $500K in starting costs. But a burger bar is rarely memorable in today’s over-burgered world.

Branding a city by its burgers is not the same as promoting wonderful local produce. The regional areas of Victoria and South Australia do a great job of branding with produce, however.

All Australian cities have become rather calcified in their branding: Sydney around beaches, Melbourne around laneways and grunge suburbs, Brisbane around the river. There is not much whimsy and wonder, not much truly new.

Singapore has the Gardens by the Bay, the airport butterfly garden, the free airport cinema, and ever changing Orchard Road. Experimental ideas in Melbourne are largely copies of overseas, and somewhat dull (in my view). Tokyo has lost some of it’s ‘button-down’ ways and has a new creative vibe. Tokyo likes jazz (like Vienna). Who knew?

Melbourne 10 years ago had a great alternative arts vibe, and Sydney 10 years or more before that. Now it feels safe. In my view, even the National Gallery of Victoria has forgotten its mission (like AGNSW before it) and is more ‘me-too’ globalism. I cannot understand how the international division shows Australian art, as well as the Australian division. It seems a popularity contest rather than a serious attempt to create art that informs, and is of lasting value.

There is a Melbourne vibe that ruled during 2000-2011, before the apartment boom, and that whimsy and joy and fun is not as prevalent as it was.

It was known as ‘Marvellous Melbourne’ and whimsy and wonder were the order of the day. But like anything new, it is now calcified and staid.

Australian cities have many great ideas, and could do to rediscover some wonder, joy and spontaneity in their approach.

Right now, it seems Asian cities have stole a march on Australian cities on these 4 areas, while Asia could do to learn from Australia on the first 4 areas I mentioned.

Of course, the preceding thoughts are largely driven by the opportunities in Australia and Asian cities. A well balanced city brand will make each city’s citizens happier and more harmonious.

And for all cities, no one-sided property boom ever ends in happiness without good strategic guidance. So brand on!