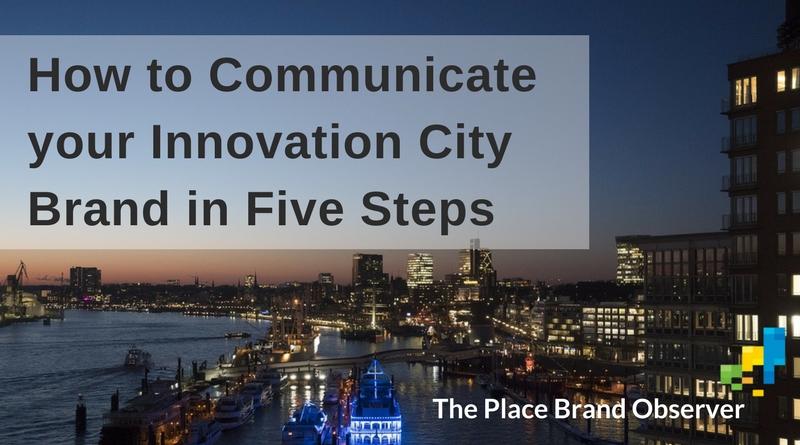 As Director of 2thinknow I regularly get to look at city data, including some very interesting data on tourism, trade and export development. Covering 965 unique cities this year to answer research questions, I have learnt some interesting facts about cities in some pretty diverse places.

Goteborg and Campinas are two cities you may never have heard of, which have some interesting stuff happening. Denver has a mini-economic boom, as does Houston. Detroit and Athens are staging economic recoveries at current… but too few people know!

So, in my current role as Expert Observer for The Place Brand Observer, I wanted once again to share some general insights from the city benchmarking data I oversee, to help you in your city branding strategies.

These insights are summarized as 5 key lessons for communicating innovative city brands. i.e. how you can tell people interesting things about your city that attract visitors and investment.

One of the main problems of brainstorming and creating ideas, is not keeping an open mind.

Many of us think that the core of innovation is an ‘idea’, but we need more than one idea, which – however brilliant – may not be fit for purpose (i.e. achieve your objectives).

It’s useful instead to think of ideas as hypotheses, to be tested and proven – or disproven, or even modified and re-tested.

However, most of us who want to believe our own idea (or hypothesis) will try and seek evidence to support it, and discard evidence that does not. This is known as ‘confirmation bias’. For example, if we believe green business ideas or European Union subsidies will create innovation, we will tend to embrace these ideas irrespective of evidence.

We often embrace ideas we ‘like’ as broad-based trends, without rigorous enough analysis to determine how strong a trend they are. In short, we seek only evidence to confirm our biases.

A technique I use to generate valuable ideas is multiple hypothesis scenarios. But this skill is not easily acquired due the sheer volume of reading necessary to understand the basis of such a model of reality. Reading Zen and the Art of Motorcycle Maintenance [Amazon] is how I started my journey into hypothesis planning some time ago. Great book for those who may recall it or want to look it up.

Contrast this with the Expert approach, which insists that Experts presenting a single ‘expert’ solution are correct. When this solution fails, there is no other scenario.

Branding is ultimately subjective, and rarely are we enough ‘on song’ to know what really works.

The problem with the expert approach is that it there is no flexibility, which means that it shatters like glass. The strength of the hypothesis approach is its innate flexibility, bending like sheet metal. This is not apparent to many, but all great innovations were created using the hypothesis approach, not the expert approach.

Create and test multiple brand messages. Don’t try for a single stroke of genius, or a message for a single committee to agree on.

In short, branding messages should be subject to A-B testing and evidence, an approach which is called scientific marketing.

2. Base your branding on evidence

What data points will you need to benchmark your place’s performance against competing places?

Every place needs evidence for a strategy, to a) measure the impact of the branding message and b) set the starting point for and audit of ‘where are we at’.

All evidence should compare a city against a basket of competing cities. This can be adjusted for population, but in reality, sometimes comparing yourself against bigger cities is not a bad idea. The impression of those leisure or business connections you are trying to make rarely has regard to population, so perhaps you should consider not having that much regard either. People rarely know the accurate population of cities and instead rely on opinions of congestion (which may be based on day visitors, not population).

Impressions are often statistically wrong, and population as a factor is far harder to consider than it might look.

So, gather around 10-30 data points (this is the average for our customers) to benchmark your basket of 20-40 competing cities. Typically, only major corporations compare 100 to 500 cities in one go.

These data points should inform you about how your brand message will be perceived, and address its target market.

Once you have target sectors and demographics, as well as some sort of analytical model of the target markets, you need to promote specific innovators, and innovation areas.

One of my favourite movies is ‘Other People’s Money’ [Amazon] with Danny DeVito, especially the theme of converting a loss-making cable and wire business into an airbag manufacturing business using steel mesh. By repurposing the factory, the buyout and breakup of the company is avoided.

(For those who enjoy a funny business movie, check out the film. It teaches several good points about business that were learnt in the 1980s and forgotten now.)

The point: how can you exploit your city’s strengths to promote it? What 3 to 7 specific, detailed aspects can you test and promote?

Crucially, not a general ‘theme’ of pro-business, but a highly specific industry with a strong following. Perhaps golf courses (high spend customers) or foodie destinations, or boutique glass manufacturing? Where does your city innovate, and where is that not known?

Your target customers know probably very little of what you take for granted, which could be aspects of your city your are bored with. So, take a fresh look at your city’s key ideas. Test a few branding messages by promoting specific innovators. Be specific.

4. Promote ahead of results

Once you have had some promotional success with feedback from the market, you can really ‘go to town’ on the promotion. This is a controversial point however, as promoting ahead of results, should not be misleading.

When we compiled a list of tech cities for Tech Insider, we got asked where is Tel Aviv? The city ranked just outside the top 25 for advanced technology application (at that time). Because start-ups were a significant component, we copped some queries from at least one local true believer online.

The reality is that Tel Aviv, whilst a great city (and among the top 50 cities worldwide for innovation), is not the global leader in start-ups as commonly supposed. Tel Aviv is not number 1 in number or value of start-ups. It’s still extraordinarily successful in change in value, but realistically Chicago or New York are more important to a global start-up ecosystem – although many people don’t consider these cities as much.

That’s the danger in bias, headlines and not numbers. But Tel Aviv have marketed themselves well.

When you look at the data per capita, or linkages, then Tel Aviv gets a better numerical wrap. But these show rate of improvement, and not absolute current position. And Tel Aviv is improving faster than most cities.

London also did this in 2010-2013, over-promoting, prior to becoming the world’s most innovative city (ranked number 1 since 2015 in the Innovation Cities index for innovation economy pre-conditions).

Sometimes, you should look at what will be the future success story, and promote that. As your image as leader in the field grows, you will receive more opportunities. This should not be too far ahead of reality though. Otherwise there will be a disconnect. For instance, London was in 2012 already a top 10 city in many of the categories covered by the index.

Getting your city marketing a little ahead of results is a good idea if you are willing and able to commit to becoming what you said in future.

How far ahead of reality you are will determine the outcome. Better to be only a little way ahead!

5. Aim to rank well in indexes

Finally, indexes should be based on facts (not city hype), so you should enquire about each of the different city indexes, and look underneath the hood at what they measure.

You can then improve those areas, or improve how you communicate them (often as a big a problem as actual performance).

Many cities do not communicate their actual performance well, even on their own website. This also applies to states, provinces and regions.

2thinknow (my employer) publish the Innovation Cities Index annually (and have for 10 years now). It is the longest running and largest continually published city ranking and classification related to innovation, technology, education and smart cities. It is based on analysis of a variety of 1-13 city indicators across 31 industry segments. This makes a total of 162 indicators, that measure innovation pre-conditions in the city.

Although I am not involved with the Mercer or Economist livability indexes, I have studied them and know that these are long standing indexes that some cities promote. Also worth a look are the specialised indexes for real estate or start-ups at the national level (e.g. cities or places within the USA or EU).

Long-standing indexes and rankings tend to change slower, and thus are more reliable.

Many other places work to become a city of culture or literature, or similar – titles awarded by various government programs, including by the EU and UN. These have some worth, and are often used in marketing claims.

Magazine rankings (more volatile) can be useful as a first target, to get some promotional benefit. Many magazines like Forbes, Fortune, Monocle, Tech Insider, etc. publish rankings of varying depth, that may not be published every year.

Bear in mind, rankings should have credibility, so length of establishment helps.

There we go, that’s a simplified five step plan to communicate your place’s innovation. I hope this helps you make your city branding efforts even better!

“...a digital meeting place for all those who are passionate about cities, regions and countries, creating a network of complicity that helps us share experiences, work better and in the end enjoy our work even more!”

Yellow Railroad (Edinburgh, Scotland) is Tom Buncle’s destination consultancy. Tom helps destinations unearth their competitive mojo, so they can stand out on the world stage.